With inflation rising, interest rates increasing, and broader market indices retreating from their highs — all occurring alongside international conflict and a lingering pandemic — the first quarter of 2022 has been very eventful at the macro level. Against this contentious backdrop, the litigation finance market continues to evolve, mature, and grow. As new industry trends take shape, the effects of the pandemic on the court system have been on display through the results of our publicly traded peers.

During the past quarter, Westfleet Advisors published their third annual Litigation Finance Market Report for 2021. The report asked 47 litigation funders to self-report data relating to capital raised, funding commitments, and the types of deals they transacted. While we applaud Westfleet’s efforts to provide additional transparency into our market, we take these metrics with a grain of salt given the self-reported nature of the underlying data.

Surprisingly, the growth in new commitments was not driven by increasing deal size. The reported average size of a transaction in 2021 was $6.5 million, compared to $7.8 million in the prior year.

However, we disagree. From our vantage point of operating in the small to mid-sized deal segment, we have not seen a material impact from new entrants, but rather from larger incumbent funders who are willing to entertain smaller deal sizes.

Another interesting trend is that patent litigation represented a significantly higher percentage of new commitments in 2021, making up nearly 30% of all deal allocations. That marks a 61% year-over-year increase for patent deals as a percentage of total commitments. We believe this means that more firms are beginning to invest in patent matters and those with previous exposure continue to expand their patent portfolios.

The growth in patent litigation funding aligns with scaling assets under management, as these types of matters typically have large litigation budgets and potentially high damage models — enabling funders to deploy more capital into fewer deals. We believe these trends of smaller deal sizes and greater patent demand are indicative of funders expanding their transaction parameters due to increasing competition for high quality assets.

The Continued Effects of Courtroom Delays

During the first quarter, Burford Capital, the largest publicly traded litigation funder and an industry bellwether, reported its full year 2021 results, announcing its first ever annual loss in the amount of $72 million. Burford attributed the loss during this period to an issue of timing.

According to its Chairman, Hugh Steven Wilson, “Burford turned in an excellent 2021. This may seem odd to say as we report the first loss in our history, but that is a matter of timing. We wrote significant new core legal finance business in 2021. Even in an era of slower case progress, we generated significantly more cash than needed to cover all of our expenses. Burford ended the year with substantial liquidity and strong access to capital, and we recently announced our latest $360 million private fund.”

These results point directly to the effects of COVID-19 on the world’s court systems — namely slowed court dockets and delayed case resolution outcomes for funders. We view the increasing duration as a potential double-edged sword for funders depending on how their investments are structured. For funders that primarily price their deals as a multiple of their investment as time elapses, this could lead to larger cash-on-cash returns if there is no impact to the underlying merits of their investments.

We were also encouraged to see Burford’s continued success in raising capital for a new fund during the same period, which confirms continued investor demand for this asset class.

The highlight of Q1 2022 for LexShares was undoubtedly the closing of LexShares Marketplace Fund II (“LMFII”), which was oversubscribed with $103 million in commitments. News of the successful raise was covered by both Bloomberg Law and Law360. The fundraise was led by Titan Advisors, a $4.5 billion alternative investments firm, and also featured participation from other institutional investors and select family offices. We greatly appreciate LMFII members’ support, commitments, and confidence in our team.

During the quarter, Maria-Vittoria Carminati, LexShares’ Vice President of Business Development, authored an article for the American Bar Association, titled Five Common Misconceptions About Litigation Funding, in which she dispelled a number of frequent misreadings of funding products by attorneys.

Last but not least, we are excited to announce the hiring of Wali Rahman as LexShares' Senior Engineer. Mr. Rahman, who will be responsible for all full-stack development initiatives and advancing the firm's entire suite of technologies, was previously the lead engineer for the features development team at PatientsLikeMe, where he developed, updated, and maintained new features for one of the world’s largest personalized health networks. Mr. Rahman received a Bachelor of Science in Accounting from Queens College City University of New York prior to graduating from the Fullstack Web Development program at the Flatiron School.

This release may contain “forward looking statements” which are not guaranteed. Investment opportunities posted on LexShares are offered by WealthForge Securities, LLC, a registered broker-dealer and member FINRA / SIPC. LexShares and WealthForge are separate entities. Investment opportunities offered by LexShares are “private placements'' of securities that are not publicly traded, are not able to be voluntarily redeemed or sold, and are intended for investors who do not need a liquid investment. Private placements are speculative. Investments in legal claims are speculative, carry a high degree of risk and may result in loss of entire investment. 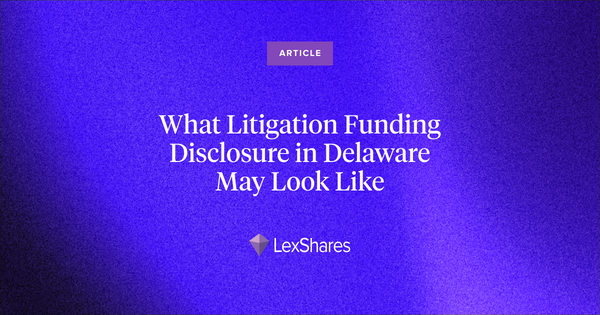 A standing order issued by Delaware's chief federal judge requires litigants to disclose whether their cases are being financed by third parties. Cayse Llorens and Matthew Oxman examine the decision's effects... 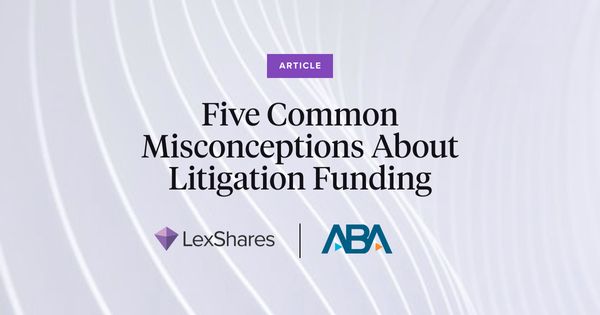 Although litigation funding continues to become more entrenched in the American legal industry, certain misbeliefs about the effects and implications of obtaining funding have persisted...